THE MOST POPULAR ROLEX MODEL OF ALL TIME

With a brand as successful as Rolex there is always a fascination about which model in their portfolio wins out in the overall popularity stakes.

There are, of course, some huge names to throw into the hat. The Datejust and Oyster Perpetual have to be right up there in contention, by virtue of their versatility, the fact they are at the lower end of the pricing spectrum, and with both having been around seemingly forever.

The Submariner is another shoo-in, obviously. The blueprint for every diver that has come along since, and the most counterfeited watch ever made. Similarly, the GMT-Master and the Daytona are so emblematic of the brand they are instantly recognizable everywhere; the kind of fame that only comes from massive admiration over many many years.

However, the real winner is none of these. In fact, if well placed sources can be relied on, the actual most popular model is so far out in front that it is not even close.

Who’d Have Thunk It?

On the face of it, calling the Lady Datejust the most popular Rolex model of all time seems too extraordinary to be true. After all, the brand built their unequalled reputation on the back of their stylish and hardy men’s watches. The ladies collection essentially consisted of scaled-down versions of the more dressy examples of those, generally with a few more precious stones sprinkled about.

Women have long been underrepresented by Rolex’s output which, ironically, goes a long way to explaining the runaway success of the Lady Datejust series.

Why the Lady Datejust?

At the risk of starting a whole debate, men are typically far more interested in luxury watches than women. (Note I said typically! I’m not generalizing—please don’t write in!)

The reasons are fairly obvious. Aside from the whole mechanics of the thing, which tend to leave guys drooling, a watch is most men’s only real accessory, the one thing that will stamp any kind of individuality on their outfit. Women, on the other hand, can swap and change purses, shoes and other items of jewelry to their heart’s content as occasion demands, with a timepiece playing a more supporting role.

As such, women tend not to amass great collections of various different types of watches, but rather go for the one or two that will be versatile enough to match the most situations. Enter the Lady Datejust, which ticks just about every box.

First of all, it’s a Rolex, and even those with very little or no interest in the horology scene as a whole recognizes the brand. Even more importantly, they trust the name.

In addition, there is just so much choice throughout the range that it would be virtually impossible not to find a model that appealed. As well as being available in every type of metal Rolex use, from their proprietary steel alloy, known as Oystersteel, it can be had in each of the three flavors of gold through to the ultimate luxury of platinum. Yet apparently it is still the Rolesor models, the brand’s own blend of steel and gold, which remain the biggest sellers.

Dials and bezels, too, offer huge variety. Surrounds come in fluted and smooth types, and there is also a raft of diamond set bezels. As for the faces, the different styles and colors that exist are simply too many to count. Just about every shade is included, along with materials such as mother-of-pearl to give each one a unique look. Full diamond pavé dials are also in abundance.

But perhaps most appealing for a modern female audience is the range of different sizes. When the series was first launched in 1957, some 12 years after the men’s version, it came in at 26mm. That remained the smallest model available right up until 2015 when it grew to a still fairly tiny 28mm.

However, the Datejust range now comes in a total of five sizes, with everything below 36mm (so, the 34mm, 31mm and 28mm) listed as a woman’s watch on Rolex’s website. That gives a lot of choice, although it is becoming more and more common for ladies to wear pieces originally intended as men’s models.

If the fact the Lady-Datejust is by far the most popular Rolex of all time comes as something of a shock, perhaps the second biggest surprise is just how affordable they are on the secondary market.

It is very possible to pick up a beautiful example for around $2,000, and with the series following the same design philosophy as the rest of Rolex’s output, i.e. only the most superficial styling changes year after year, it is one of those times when few people can tell a 20-year old watch apart from one made last week.

As for the internal workings, they are at least, if not more, impressive than their male watch counterparts. The calibers fitted to Rolex’s ladies collection are subjected to the exact same assessments, but have to maintain their levels of accuracy and resilience using far smaller components. Not only do the mechanisms measure up against the men’s, the last two generations of movement driving the Lady-Datejust hold the record for highest first time pass rate and highest level of consistency ever tested by the COSC.

So, with all that going for them, why does the range stay so undervalued as a preowned buy? 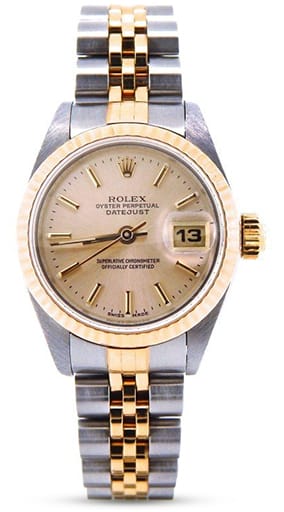 It is really down to the nature of the buyer. Like we said, luxury watch collecting is much more a man’s hobby than a woman’s, hence the incredible health of the market for men’s models. Male collectors will buy and sell at a significantly higher rate than women, and also accumulate a far greater number of pieces to pair with different situations.

For ladies, one or two tends to be enough and they are far more likely to hold onto their models for longer. If and when that watch needs replacing, reports have shown women tend to opt for a brand new rather than preowned one. All those factors added together equate to some real bargains cropping up without too much searching.

Outselling all the most iconic models from the world’s most successful watchmaker takes some doing, but with its blend of uncompromising elegance and engineering perfection, the Lady Datejust manages it with room to spare.

A legend in the industry for the last six decades, it is no exaggeration to call it the archetypal women’s watch.